Trump is not America. That is why Germany will remain the most important European nation for the USA. A Response to Jörg Lau's and Bernd Ulrich's America Criticism. (This article appeared in Die Zeit on October 31, 2017, and is available in German.) 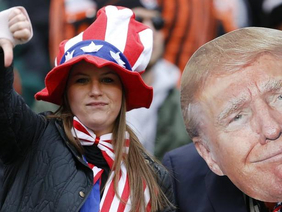 Although for more than 70 years common values were invoked to keep the transatlantic partnership together, now is the time to assert shared U.S.-German interests. For this reason, we, the signatories, take issue with the recent argument offered by Jörg Lau and Bernd Ulrich in DIE ZEIT ("Something New in the West", ZEIT 43/17) which argues in effect for a German led decoupling of the West from the United States. We are not making a sentimental case for transatlanticism; rather we assert that we have shared interests.

While Lau and Ulrich contend that the U.S. has been receding in its strategic commitment to Europe before Donald Trump took office, Germany remains without question the most important European nation for American foreign policy. The U.S. cannot ignore the strategic importance of a country which has the largest economy and, with the looming exit of the UK from the European Union, whose political weight will only increase. Germany is the sixth largest export destination for U.S. manufactured goods, and at $255 billion German investment in the United States is more than double U.S. investment in Germany. As the Obama Administration recognized, Germany remains key to a coordinated western policy on Russia and has been the driving force on the Russia sanctions policy within the EU and of the Minsk accord on Ukraine. It was this rather than a strategic disengagement from Europe which prompted the Obama team to defer leadership to Germany.

In addition Germany has the deepest and most important relationship with China of any European country, a factor which will only increase in significance in the future of American policy.

The German-American relationship is fundamental to the values and interests of the Western liberal order. The Trump Presidency is ambivalent at best about that order. But in contrast to how Lau and Ulrich argue, Trump is not America and perhaps does not even speak for his own administration on the vital issues of foreign policy. The so called "adults" in the Administration remain committed to the Atlantic alliance and to the U.S. commitment to NATO.

While Trump is sui generis in many ways, he has picked up on a number of trends and policy concerns that Presidents before had too, especially in the area of defense burden sharing and aspects of German economic policy. Yet Trump is quite alone on the issue of the American security guarantee to Europe via NATO, on resolve to counter Russian attempts to undermine the European security order and on the need for a broad alliance and a multilateral approach to the world. Finally, and most important, the U.S.-German relationship has a broad and deep base in civil society including in the private sector, academia and the broader cultural relationship. Over 50 million Americans (17% of the total U.S. population) still can trace their heritage back to German roots (including Donald Trump).  This means, as the German statement rightly points out, that the relationship goes well beyond the White House to the Congress and to the state and local levels, key factors which Lau and Ulrich ignore. These institutionalized civil society connections provide stability and predictability in a time of uncertainty in German-American relations and should be reinvigorated.

Germany must continue to build up its defense capabilities and to take on a role in European defense to match its growing economic and political weight.  As Lau and Ulrich note, it is clearly the time for Europe and Germany to grow up. Calls during the German election campaign against increased defense spending on the grounds it would mean giving in to pressure from Donald Trump are completely baseless and miss the key strategic challenges facing Germany. There is a widespread consensus in the United States that the U.S. is over-stretched in its defense commitments and that Europeans, in particular, need to do more in this arena. But if Germany takes on a larger role both within NATO and within the EU on security cooperation, these commitments will not be called into question. Given its vast budget surplus, Germany should take immediate and substantial measures to modernize its military capabilities and its defense industrial base.

Let’s be clear: the main challenge on the trade-policy front comes from China and its state-capitalist economic model. In this regard, Obama’s dictum—"If we don’t set the rules, China will"—still holds. But neither Germany nor even the EU alone has enough muscle to oblige China to play by Western rules based on openness and the rule of law. Had it been successfully carried through, the  Transatlantic Trade and Investment Partnership (TTIP) between the United States and the European Union would have accomplished this objective—but here the problem was not that the U.S. turned away from the liberal economic order but rather that Germany did, with its misguided fixation on the imaginary evils of American capitalism instead of the very real ones coming from China. There is no post American West but a post liberal West

On the issue of intellectual property that Lau and Ulrich mention—as well as China’s Non-Market Economy Status in the WTO, investment screening, trade defense instruments, and the role of state-owned enterprises in the global economy—Germany would find a like-minded opposite number in the Trump Administration, whose Trade Representative, Robert Lighthizer, has more than once spoken favorably of the European Union as a partner for the U.S. in creating a fairer international trading system. While TTIP—even with new content and under a new name—should not be relaunched while the NAFTA negotiations are still ongoing, Germans and Americans would both benefit from keeping engaged on this positive common trade agenda.

In addition to the areas addressed above, following the German election there is more room for cooperation on the refugee issue. Lau and Ulrich do not even mention the recent German election and the rise of AfD and anti-refugee sentiment in Germany. The new German government is likely to be much tougher on these issues as the agreement on limiting refugees between the CSU and CDU indicates. Germany is now in a weaker position to lecture the Trump Administration on border controls and opportunities do exist to cooperate on human trafficking and on limiting refugees.

These should be combined with efforts to increase assistance to regions which are producing massive refugee flows. The Lau-Ulrich article paints a stark picture of an America of growing inequality and racism while ignoring similar trends in Germany. The fabric of society is fraying on both sides of the Atlantic. How we come to terms with social change – which comes as a result of the movement of people as well as factors such as rapid digitalization and the changing nature of work – will define how we as societies continue to thrive and grow. Here, too, Germany and the United States can benefit from greater collaboration.

There is no post American West, there is an unfortunately post liberal West which includes more of Europe than they concede.