It was some coincidence that on the same day that a presentation at the Mid-Atlantic Club Bonn about the subject "Reform of the Bundesnachrichtendienst" (BND – Federal Intelligence Service) was taking place, serious newspapers such as the German Daily Frankfurter Allgemeine Zeitung (FAZ) published nine (!) articles focusing on the subject of secret services (FAZ, 9.3.17). 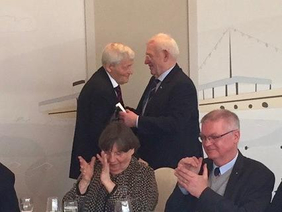 The reasons for the conjunction were numerous reports about hacker attacks, allegedly also coming from the Frankfurt-based American Consulate General, being directed against various targets at home and abroad: for example the infamous attack on the mobile phone of the German chancellor (“spying amongst friends – that's not on!”).

The spies who are spied out – How safe are our intelligence services and how safe are we from them?

The WikiLeaks platform had published thousands of pages that were probably “leaked” or hacked from the outside, which revealed the “hacking-tools” of the CIA. FAZ carried banner headlines such as: “Berlin takes reports about hacker attacks by the CIA ‘very seriously’”, and in the subline it was written: “No own findings / Washington is silent / FBI investigates data theft.” Another banner headline which attracted further attention asked: “The spies who are spied out – How safe are our intelligence services and how safe are we from them?”.

On March 9th, Dr Hans Georg Wieck, former President of the German Federal Intelligence Service (BND 1985-90) and former ambassador at various focal points in the world--for example in Moscow (1977-80) and later in Brussels at NATO (1990-93)--gave a presentation at the Mid- Atlantic Club Bonn about “Democracy and the German Federal Intelligence Services.”

It was clear at the outset that a historical approach concerning the role of the secret services in Germany was on the mind of the very experienced diplomat and secret service official (born in 1928), in order to show more clearly what the tasks of the secret services are today. By outlining the development of the Federal Intelligence Service to-date, Wieck wanted to give an orientation in a still much politicized debate about the functioning of the secret services. (Just think of the lengthy NSA parliamentary committee of inquiry in Berlin, the agonizing NSU [national socialist underground extreme right wing group] debates, and the first four studies compiled by an Independent Commission of Historians, which were investigating the history of the BND 1945-1968 in which the history of the German Federal Intelligence Service was reviewed. All four studies demonstrated that the Service had been quite “burdened” at the beginning with high ranking personnel from the Second World War through a merger with the organization Gehlen.)

The subject “Democracy and the Intelligence Services in the BRD” (there were only a few remarks about the new BND law), was presented by the speaker in order to give an overview about the development of the secret services since the end of the Second World War, with a particular view of the Allied Powers.

Wieck described the charged relationship between intelligence and democracy, the mistrust which politics initially had towards the secret service during the founding period at the end of the Second World War, the period of the Bonn Republic and the Berlin Republic. With the new construction of the BND headquarters in Berlin and the move from Pullach near Munich to Berlin, it is encouraging to see, that despite all controversial debates, there is a growing chance for a more efficient and “mature” relationship between the political leadership and the BND, which could find more support in society and – despite all necessary operational secrets – could become “more acceptable for the public.”

Under US President Trump, who questioned the role of NATO during the election campaign, a lot of insecurity on the European side has arisen

Wieck, who has published a lot and spoken extensively in numerous lectures on questions relating to the secret services and their tasks, described the current situation as “serious,” given that Russia is our geographical neighbour. He described Russia as a “strategic world power”, a nuclear power that could feel tempted to blackmail any non–nuclear European country unless the United States helps the country under attack - as has continuously been the case since 1949. However, under US President Trump, who questioned the role of NATO during the election campaign, a lot of insecurity has now has arisen on the European side and the fact that Trump demands the imposition of import tariffs must also be taken seriously.

Germany is “a key power” in Europe and therefore has a major responsibility with respect to intelligence and security policy cooperation with other NATO countries. The main task of the national intelligence services is focussed on internal and external security. The government is responsible for the country and for the protection of its people while the Federal Intelligence Service has to support this policy by delivering the necessary “facts.”

These days, Germany is confronted with threats to its security by international terrorists, criminal organizations or states that are hostile towards Germany. Although internal security matters belong to the remit of the Federal Office for the Protection of the Constitution (BfV) and the respective state offices, the information which is collected abroad by the Federal Intelligence Service can be of decisive importance. However, the exchange of important data depends on the level of “confidence” between the German intelligence services and those of other states, including the ones that are friendly to Germany and the German intelligence services.

During the discussion, Wieck strongly emphasized how a gradual increase in confidence is needed in international cooperation. While on the one hand there is the strict separation rule concerning intelligence gathering and law enforcement (as known for both the BfV and the BND –unlike the possibilities which the CIA or MI6 agents have), it is equally important for Germany that, contrary to most intelligence services of other nations, the BND can collect information for all ministries as far as security policy is concerned.

Parliamentary Control of the Secret Services

The issue of “parliamentary control” is extremely relevant for Wieck. The democratic state can only defend itself if the people are fully confident in their services and if there is appropriate transparency of the services. The sometimes tense relationship between secret operational procedures (including the crucial “human source protection” as one of the most vital part of intelligence gathering) and the required transparency, is obvious. The fact that only a few weeks ago a new BND law was passed while in the 1990s only a provisional legal framework for the BND had been created (in contrast, the Federal Office for the Protection of the Constitution was granted a legal basis in 1950), clearly demonstrates how difficult it is for the political leadership to codify the tasks and the legal provisions for the BND. (This was part of the history of Germany after the Second World War and the role of America, as Wieck vividly illustrated with examples.) In addition to the parliamentary control commission, according to the new BND law, there will be an “independent committee consisting of Federal judges and attorneys” (“only lawyers”, as Wieck critically commented in the discussion), which should report to the parliamentary control commission.

a new “leadership culture” is required in the intelligence service.. which could result in a better co-operation (“confidence”) with the secret services of other NATO states and countries

Wieck emphasized that a new “leadership culture” is required in the intelligence service. With a younger generation in leading positions of the 6000 members of the Federal Intelligence Service (according to its website), this could improve the relationship with the political leadership, clarify the operational challenges, and result in a better co-operation (“confidence”) with the secret services of other NATO states and countries. This applies in particular, for example to the United States (but also in some respect to the other “five-eyes” States: Canada, New Zealand, Great Britain, Australia) whose technical reconnaissance has been more comprehensive than the possibilities Germany has so far for combating terrorism and other global threats. An important aspect is a prompt data-exchange. Wieck concluded that it was a key task for the BND to restore confidence from the “base to the executive level.”

Against such a background, it is worthwhile recalling a previous MAC-meeting with MdB and Head of the Foreign Policy Committee of the CDU/CSU faction, Rodrich Kiesewetter. Kiesewetter had underlined the necessity of opening up the Federal Armed Forces (Bundeswehr) to specialists in areas concerning the handling of cyber-threats and cyber-warfare. He emphasized that new forms of employment and changes in the usual military procedures had to be developed so that these new generations of “technicians (nerds)” could be employed for example in the defence of cyber-attacks. Hacker attacks can not only be countered by a continuous “hardening” of the communication channels, but also with the help of the capabilities of the new generation that has grown up with the Internet and the modern communication and information systems. Those talents are well versed and sensitive to privacy rules and data protection, given the intensive debates which have occurred in Germany regarding this subject. It is vital to incorporate these new talents and to use their skills for a more efficient global reconnaissance.

Much of what the former BND President and experienced diplomat Wieck presented in his historically grounded overview--as well as in his outline concerning the principal relationship between the Intelligence Services and the democratic state in Germany and Europe--can help to open up a more objective debate about the functioning of the BND and lead to a deeper understanding and appreciation by the general public.