In a speech presented at the Bonn Mid Atlantic Club in late November, the President of the German Federal Academy for Security Policy (BAKS), Ambassador Dr. Hans-Dieter Heumann spoke about “Europe’s capacity to act in the foreign and security policy realm.”  His remarks as well as the subsequent discussion underlined the challenges which the current German foreign and security policy is facing: Firstly Germany has to shoulder within the European economic Union an increasing responsibility. On the other side Germany must define its interests within the European Union and within the multipolar world. And finally a stability architecture of the European Union is only possible if it occurs in close coordination with the European partners, accompanied by a constructive partnership with the US, as well as a strategic partnership with Russia which itself is great a European power. 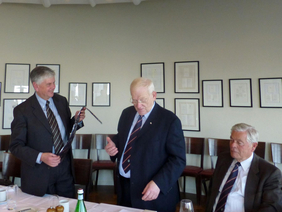 Europe and Germnay's capacity to act

Heumann who in August 2011 was appointed as the new head of the Federal Academy for Security Policy and who looks back to a long career in the diplomatic service, outlined in a few words the challenges which Germany faces in Europe and globally. What is the key is the question of Germany’s capability for action, combined with the question: What are the aims of German politics? What role does Germany play in the multipolar world and what resources are necessary to adequately respond to the responsibilities and duties?

What's the role of Europe in the multipolar world and with which partners?

In respect to Germany’s capabilities for action, this question involves more than power and interests.  Heumann spoke about an “inner and outer dimension” of Germanys capability for action focused on the question: In what shape is the European Union? Do we want to have in the future a common Europe or an intergovernmental Europe? What's the role of Europe in the multipolar world and with which partners?

Heumann was referring to a speech given by Chancellor Merkel in November in front of the European parliament, in the context of which Merkel spoke about four core aspects of a future “European Economic Union”: These include a renewed economic and monetary union accompanied by a harmonized financial market regulation; it also includes  more common fiscal policy, a common economic policy, coupled with the creation of a European banking union and the strengthening of several European institutions.

Heumann similarly made reference to a recent OECD study in which the magnitude of the future global players in the multilateral world became evident: China produces 25% of the world GDP, the USA 16% and Europe 9%. That means, as he underlined, Europe must maintain its ability to act globally and this is only possible by way of a common economic, security and foreign Policy.

During the discussion Heumann at one point underlined the importance of strengthening the German French Alliance which should also include Poland. And he stressed in response to a question by the author of this article, the importance of Germanys strategic partnership with Russia, despite recent noises made by certain political circles in Germany. “Russia needs Europe for its modernization“, Heumann said. “It is a strategic partner of Germany with a trade volume of over 80 Billion Euro.”

Celebrating the 20th anniversary of the Bundesakademie für Sicherheitspolitik

Heumanns speech should be seen in the context of a speech which former German Foreign Minister Hans- Dietrich Genscher recently gave at the occasion of the 20 year anniversary of the “Federal Academy for Security Policy” (Bundesakademie für Sicherheitspolitik”) in which he described the challenges which the European Union in general and Germany in particular are facing. He called for a constructive cooperation with the US in the shaping of a more just world order and underlined at the same time that Russia which is a great European power, has a firm place in Europe, “Russia needs Europe for its modernization. But Europe also needs Russia. We both live on the same soil”, Genscher said.

It's “a forum for strategic discussion”, Genscher said

Genscher made reference to the function of the “Federal Academy for Security Policy”(BAKS). Founded 20 years ago in the aftermath of the end of the cold war and German reunification, it is administered under the umbrella of both the German Foreign Ministry as well as the German Ministry of Defense. With its seminars for leading political representatives of the German State, the Institute’s function is to shape the opinion of the political Elite. It's “a forum for strategic discussion”, Genscher said and he combined this with a few reflections concerning the present German Foreign and Security Policy.

Two decades after the historic changes, the collapse of the Berlin wall, the overcoming of the division in Europe and the end of the cold War, Europe stands in front of a new “fateful test” Genscher said. A test in which the two tier world with its poles Washington and Moscow is belonging to the past. Genscher spoke of a “New World Order” which is characterized by new emerging “power centers” (which includes China, India, Brazil, Indonesia and Japan). They are indispensable in shaping the world and in solving the global economic and financial problems.

He spoke about the “future mission of Europe” and the historical responsibility of the European Union, which after the second world war, in response to the aberrations of German and European politics, had been designed by the “European founding fathers” in order to function as a “future workshop not only for the European continent but for the world as a whole.” Genscher described the current new World order as a “World neighborhood system”, characterized by global interdependence.

A positive cooperation is only possible if the new thinking which had inspired the European founding fathers to lay the basis for two great European peace treaties- this includes the establishment of the EC (European Market 1957) and the CSCE process, an essential pathway for the European disarmament debate in 1975- prevails. “Thus what is needed is a rejection to hegemonies and a return to a new culture of cooperation as is being practiced in the Workshop for the Future Europe since decades.”