British Ambassador Simon McDonald was Special Guest of the MAC-Bonn in 2013 - ahead of the European elections 2014:
In late October, the Bonn based Mid-Atlantic Club (MAC, a private association of former military, diplomatic and industrial representatives with offices in the U.S., Great Britain and Germany, which devote their work to the strengthening of transatlantic relations) organized a meeting in the Bonn City Hall in cooperation with the City of Bonn. At that time the author had the chance to participate at the event.

The British Ambassador Simon McDonald was invited as speaker as well as a delegation from the British MAC. MAC chairman and former German Secretary of State Friedhelm Ost (Bonn) stated in the introduction that the key question which must be debated today is the “future road map of European integration” and to what extent Germany and England share common goals in this debate. He made reference to David Cameron’s planned referendum, where according to surveys 65% of the British see a disadvantage in the EU membership and only 36% an advantage. Ost underlined that Germany in particular Chancellor Merkel wants to keep the UK in the European Union “since for us the UK is an indispensable partner”. 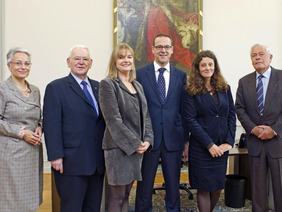 Sir Simon McDonald, Mayoress Cappel with MAC-Bonn at the Altes Rathaus, Bonn in 2013

In his speech “The Future of Europe from a British perspective”, the British Ambassador made clear that what is at stake in the debate about the future of Europe is the “roadmap of European integration” and the question to what extent “Germany and Britain have common goals.”  “The Union is not an end in itself but a means to an end for us. We see it as a tool to promote prosperity and stability, as an anchor of freedom and democracy, not only in Europe”, McDonald said. At the same time he pointed to the global challenges which Europe is facing:

The lack of democratic legitimacy and acceptance is particularly felt in the UK, but not only there.

While the EU represents only 7% share of the world population, it provides 25% of the global economic output and has to pay for 50% of the global social benefits. According to McDonald Britain has no plans to join the Euro. What is crucial from a British perspective is the development of the “European internal market”. With regard to the EU institutions the Ambassador called for more “flexibility”. “We should be clearly committed to the principles of subsidiarity and proportionality”, the Ambassador said, stressing that one must look for a variable geometry in order to find the right solutions for solving the tension between the Euro Zone and the European Internal Market. The real question one must ask today is how Europe should look like in the next 20, 30 or 50 years.

The issue is not any more to create peace in Europe, “but what counts is how we can secure our prosperity in the global competition. The EU will only be able to maintain its global position as a community of values, if it responds to the challenges and expectations of the younger generation. Here our countries share a strong common interest.”