Jim Huntley passed away on 12 April 2019. He served in World War 2 American planes as an aircrew member, though he was not deployed on operations. As a State Dept. analyst, Jim studied each country in receipt of Marshall Aid after the war. 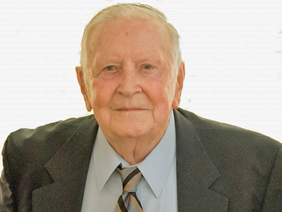 Working for the C.I.A. he mustered the voluntary spirit in each of these nations and on his retirement from public life, he worked full-time on this project, financed by several generous American trusts. He wrote constitutions for different bodies and advised on procedure.

As a federalist, Jim wanted all separate organisations to work together worldwide and he constantly emphasised the need for democracy as a means of preserving peace. Sadly, this laudable aim is yet to be achieved.

Jim used a practical approach with the Atlantic Treaty Association and the Atlantic Institute to promote their international aims. A strong believer in the English Speaking Union, he accompanied me on ESU speaking tours in the States. I had known Jim since the early 70s through Atlantic matters. He was appointed to a senior position in the Atlantic Colleges Trust by Lord Louis Mountbatten.

In Guildford, Surrey, he conferred with Prof. Otto Pick and my brother, Cr. Geoffrey Lee Williams on Europe- Atlantic affairs. Jim was an urbane, highly civilised and cultured idealist who wanted to create what he called "a mosaic of peace". He enjoyed wide ranging friendships and acquaintances in high places, where ideas were sometimes lacking in application. Jim gave content and detail to their ambitions.

Behind every great man there lurks a Jim Huntley

With Walter Lessing, Jim founded the Mid Atlantic Clubs. Jim went on to establish branches in London, Germany, Japan, as well as in many other U.S. cities. Former US Ambassador to NATO, Robert Hunter once remarked: "Behind every great man there lurks a Jim Huntley".