Dear friends of Jim Huntley, I was saddened, along with many others, to hear that Jim passed April 12. I wish to repeat the condolences I sent immediately to his wife Colleen. She has suffered a great loss. 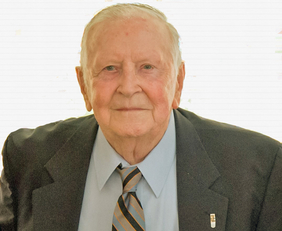 I feel a debt of thanks and appreciation to Colleen for having sustained Jim so magnificently in his difficult last years, and throughout an impressive span of decades before that. She has been a pillar upon whom he was able to rest.

Jim in turn was a pillar for all of us, sustaining us in the effort for Atlantic integration

Jim in turn was a pillar for all of us, sustaining us in the effort for Atlantic integration. He devoted his several books to showing how the Atlantic community functions as the centerpiece of the international order -- the part that kept the larger whole operational, the core of global security and global economic development, a grouping cohesive enough to keep the world as a whole somewhat cohesive -- and why it needs to be maintained and developed further. He was tireless in his efforts to adapt the Atlantic order, widen it, and deepen it so it could continue to perform these functions. It was the central public devotion of his life.

Decade after decade Jim continued seeking out and pursuing whatever could be done for it. He did not cease his efforts in the later decades, when the public atmosphere became less propitious to Atlanticism, and when he could fairly have pleaded age and exhaustion. He always looked for new ways forward.

He was always sounding out people, in the manner that he was proud to have learned from Jean Monnet

He was always sounding out people, in the manner that he was proud to have learned from Jean Monnet -- and he took care to cultivate the right contacts for this -- to see what might yet have a chance to move it forward. It was a personal honour for me to have given him some slight assistance in this in his last half dozen years. He saw the proposed trans-Atlantic and trans-Pacific trade deals as having the best chance to move the core community of democracies forward, asked me to write articles on this, edited and cosigned several of them, and passed them around to his circles.

Jim particularly solicited support on this from his old friend Zbigniew Brzezinski, and he received that support; Zbig wrote back to him, recalling how the two of them had come up with Trilateralism and how well this little "conspiracy" of theirs had taken off, and how the Atlantic-Pacific trade prospect follows up on that success. But it was not fated to be at that moment; shortly thereafter Zbig passed, and the trade deals themselves ran into political obstacles, although they are not dead.

But it was not the first time in Jim's life that a project got detoured. He knew there were strong obstacles in the nature of things when getting independent countries together, and he faced many an occasion in the course of his life when a project had to be delayed or even abandoned. He saw it as a part of the natural order of things; but saw the Atlantic community of democracies as equally a part of the natural order of things, something that had a strong historical impetus of its own, an evolutionary development to which he could contribute; one in which he could always have reasoned hope, and that he could pass on to others in better condition than he found it.

With his tenacity, he showed how much could be accomplished with a spirit of determination and pragmatic optimism

When a pathway was obstructed, he plowed on and sought out new ones where the doors might open yet. And so he achieved many a success. With his tenacity, he showed how much could be accomplished with a spirit of determination and pragmatic optimism. Jim's legacy is now in our hands. Above all, Jim leaves to us the legacy of the organizations and groups that he developed to pursue these goals and provide for that mutual support. Let us stay in touch and see what we can continue together.