A presentation on ‘The British perspective on the future in Europe’ by the British Ambassador, Sir Simon McDonald, in the historic city hall--Altes Rathaus--on the 18th October 2013, set the scene for a day of lively debate. The focus of the presentation and the discussions that followed was on Britain’s current attitude towards EU membership, in the light of a possible UK in/out referendum in 2017, and on much needed reforms within the EU. 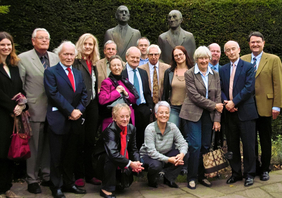 The President of the Mid-Atlantic Club of Bonn, former Secretary of State and press speaker of the government, Friedhelm Ost gave an account of Germany’s role within the EU and its contribution to the development of the EU over the past decades. He quoted a recent statement in Financial Times  ‘that Britain had created the Europe of today and should not leave the European Union’ .Herr Ost said that only through joint efforts would Europe succeed in a globalised world. Germany, without doubt, wants to keep Britain in the European Union.

Professor Alan Lee Williams, Chairman of MAC London, opened the discussion. He emphasised that the eurosceptic tide in Britain is mounting and that if a referendum on EU membership is held in 2017 it is by no means certain that the result would be in favour of staying in. The majority of the press in Britain is eurosceptic and a strong pro-EU countermovement is currently missing. Ensuring a vote to stay in will not be easy. Help from Germany in particular as well as from other member states is needed to spell out and demonstrate the huge advantages for the UK of remaining within the European Union.


During the lively exchange that ensued the following key points were made:

The main conclusions from the joint meeting are the following: