Schmagin: The Unvarnished Memoirs of a Russian Diplomat

Reading the memoirs of Russian diplomat 1Jewgeni Alexejewitsch Schmagin who spent almost half a century in Germany, serving as Cultural Attaché in Berlin, Embassy Secretary in Bonn - as well as in Vienna - then as Ambassador in Kyrgyzstan and from 2010-2015 as Consul General in Bonn, is fascinating. 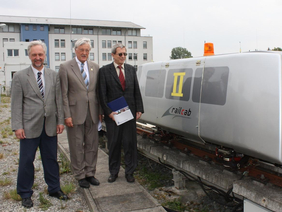 The book provides some rare insights into Soviet and Russian diplomacy in Germany during difficult times. Schmagin’s core message is that it is in both Germany's and Russia's best interests to do their utmost to maintain a cordial relationship (Jevgeny Schmagin: Meine Botschaft. Ungeschminkte Erinnerungen eines russischen Diplomaten, Droste Verlag, 2017, 375 Seiten).

The forward of the book was contributed by former SPD Minister-President of North- Rhine-Westphalia, Wolfgang Clement, who previously served as Minister of the Interior in the German Federal Government. Clement characterizes Russian Ambassador Schmagin as a man, who is “one of the foremost Russian experts on Germany” and who enjoys “the deep respect and esteem” of many people in Germany.

In his book, Schmagin looks back on his career as a Russian diplomat. Starting with his studies at the Moscow “State Institute for International Relations”, he spent nearly half a century in the diplomatic service of Russia. “Gradually, I climbed every rung of the ladder in my diplomatic career, from simple interpreter to Ambassador Extraordinary and Plenipotentiary. Germany became the most important chapter of my life both professionally and privately.”

The diplomat was born in 1949 in Ostashkow, a small town in the Kalinin region, today Tver. The living conditions under which he grew up were at that time extremely modest: “Potatoes were the staple diet throughout all stages of socialism,” Schmagin recalls. ”You couldn’t buy most things, you had to organize them and Russian provincial life was a struggle for survival and eternal procuring. Our family, like most Russian families was used to spartan living conditions.”

After graduating from high school in 1967, Schmagin applied to the “Institute for International Relations” (MGIMO) in Moscow. Under the MID (Ministry of Foreign Affairs of the Russian Federation) graduates of his year included future Foreign Minister Sergei Lavrov as well as many other contemporary Russian public figures. Nearly all alumni who entered the MID in 1972, reached high positions becoming either Ambassadors or Consul Generals and after working as an intern at the Soviet Embassy in the German Democratic Republic (GDR) in 1971, Schmagin served as Cultural Attaché of the Soviet Consulate in West Berlin in 1973, campaigning for intensive cultural exchange between the Federal Republic and the Soviet Union.

In the 1980s, Schmagin worked as Third Secretary of the Embassy at the Russian Embassy in Bonn, a city which fascinates Schmagin up to this day. “I found myself in one of the most exciting periods of Soviet-German history, among great people. (…) In my first term in Bonn I worked for over a year with Jurij Kwizinski (1936-2010) and for nearly five years with his successor Vladislav Terekhov”.
In his book, Schmagin underlines how much he enjoyed “working under the direction of Kwizinkis and Terekhov. These were well educated professionals, real characters, excellent speakers, and brilliant analysts (……) To work under them was a vocational education in the truest sense of the word, almost a school for Germanists - the type of which which no longer exists.”

the splendour and misery, the rise and fall, the achievements and missteps of Soviet diplomacy

Schmagin was particularly impressed by Jurij Kwizinski – one of the key architects of the Four power agreement on Berlin (1971) - his ‘exuberant fantasy’ and his talent as a speaker (who once received a lot of applause as guest speaker at a Rhinish Carnival Festival). By contrast, Schmagin’s verdict on former Soviet ambassador Vladimir Semyonov (1911-1992) is quite harsh.

According to Schmagin, this particular diplomat embodied “the splendour and misery, the rise and fall, the achievements and missteps of Soviet diplomacy. (…) Under his operational direction and direct participation, the most questionable acts took place, leading to decades of anti-Soviet sentiment in many inhabitants of the Federal Republic. These included the blockade of West Berlin and the suppression of the 1953 uprising in East Berlin. And with his ‘exposures’ and ‘revelations’, Semyonov certainly did his best to imitate his idol Stalin”.

In August 1978, Ambassador Valentin Falin departed the embassy post in Bonn. During his period of service, Willy Brandt’s new “Ostpolitik” and the renaissance of German-Soviet relations had begun. According to older colleagues in the MID, Semyonov was perceived as an “arrogant ruffian” and a “pseudo-intellectual”; a “brutal despot” and “megalomaniacal misanthrope”. This lack of empathy and capacity for dialogue, according to Schmagin in his book, define the “fundamental mistakes of Russian diplomacy”: the search for “a new Hitler” - an approach demonstrating a total “disregard for the German people.”

In the early 1980s, mass peace demonstrations took place in Germany. The trigger was the 1982 NATO Double Track decision taken under Chancellor Helmut Schmidt in reaction to the stationing of the Soviet 22-20 missiles (whilst at the same time it was being urged to start arms reduction negotiations). During this time, Schmagin travelled as a member of the Soviet Embassy around the country, exposing himself to hours of questions raised by  thousands of concerned citizens. As he writes in his book: “Later, when it was internationally recognized that the Soviet position was absolutely unlawful and that the position of Helmut Schmidt was correct (even the Soviet government finally confessed to having illegally stationed the SS 20 missiles), we were astonished that our passionate and sincere speeches were so positively received by the audience, even though the facts did not speak for us.” During this period, the Soviet Embassy and Schmagin, in particular, developed strong relations with the Green Party.

After a brief stint as head of the Russian Embassy outpost in the reunited Berlin (1997) and serving as Ambassador Extraordinary and Plenipotentiary in Kyrgyzstan, Schmagin returned to Bonn serving as Consul General from 2010 to 2015. During this time, he travelled around 250,000 km throughout Germany making hundreds of public appearances and meeting countless public figures, captains of industry, journalists; writers, artists and regular citizens. He vividly recalls that his discussion circles in Bonn “included a very specific group of people: former civil servants who had previously held high government positions and still exercised enormous influence, including formerly powerful ministers and high-ranking former German diplomats".

Europe has only been at peace when the Russians and Germans have maintained cordial relations.

In addition, there were countless well-attended events and receptions. Guests included Russian students and young scientists; high school students and students who studied or wanted to learn Russian; representatives of cities with twin cities in Russia; Germans who cared for Russian war graves and activists of German-Russian friendship societies; members of the German Army, journalists, clerics, policemen and also astronauts from the Institute of Aerospace in Cologne. There were also numerous conferences on the current affairs of German-Russian cooperation.

To conclude his book, Schmagin alludes to German-Russian history. It clearly shows that Europe has only been at peace when the Russians and Germans have maintained cordial relations.