Since almost 6 months- beginning at the end of October- France is shaken by a protest wave that is organized by the so called “Gilets Jaunes” (yellow vests). The movement is an agglomeration of citizens bringing together working - and middle class people as well as people from the left and right. 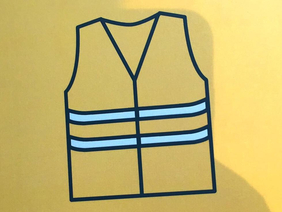 Lacking so far any specific program, the movement expresses a profound agitation about the government’s social and economic policies. The trigger was a nationwide protest that broke out November 17th against a government imposed special “Diesel tax”, which then expanded into violent clashes between protesters and French security forces all over the country.

..a conflict between the French Elite and the State and its citizens

Some smaller groups have repeatedly caused material damages against official State buildings such as the Arc de Triomphe in Paris. Two weeks ago a group of Yellow Vest Protesters assaulted the well- known French Philosopher Alain Finkielkraut, calling him a “Zionist” (Le Monde 20.02.). The conflict in France has been described by many observers, including French, as a conflict between the French Elite and the State and its citizens who perceive the State as being too much detached from the social and economic reality of the country.  This is illustrated by the fact that the  countryside since years suffers from a major labor migration where citizens leave their  villages in order  to find a decent jobs in the cities; the migration is often accompanied  by the shut- down of business and vital infrastructure including, schools, hospitals, shops, transport lines as well as emptying churches.

The actions of the yellow vests are often triggered by social networks like “Twitter” and “Facebook” organizing for flash mobs, or sending around “Video messages”, announcing blockades of crossroads. The “Gilets jaunes” phenomenon should not be seen just as a problem of France; it expresses a European problem, since it centers on the question of social guarantees, decent education, transport as well as on the question, what the representative democracy and parliamentary system is going to look like in the future.

On December 31 President Macron, after having made substantial concessions to the protesters (the increase of minimum wages and pensions as well as the withdrawal of the diesel tax), announced his intent to launch a “nation- wide debate” with the French citizens and “their elected officials” whose aim is to outline a new agenda for actions and reforms. Macron stated that we are living through a period of “ultra-liberal financial capitalism often guided by the short term greed of a few, which is coming to an end.” He furthermore spoke about the disease of western civilization and a crisis of the European dream.

Rage against injustice, against globalization and against an administrative system which has become too complex

“A number of citizens don’t feel respected,” the President said. “I think about family mothers who have to educate their children alone, about the farmers who want to live in a dignified way and about the pensioners. Everybody must have a place to live and a chance for better education.” In reference to the protests Macron emphasized that the upheaval revealed the explosion of tremendous rage: “Rage against injustice, against globalization and against an administrative system which has become too complex.”

His speech was followed on January 12th by an “Open Letter to the  French people” in which Macron proposed a nation-wide debate in French town halls, by suggesting that “all should together address the big questions of our future: “That’s why I have proposed and launch today a big national debate which will continue until the 15th of March.”.

He underlined that the fight against unemployment must be a big priority: “I think we must rebuild an industrial sovereignty and invest more knowledge and research….We must build a renewed social system to better protect the French citizens and reduce the inequalities. We must invent a productive project, social, educational, environmental and a new Europe that is more just and efficient.”

The debate, Macron underlined, must respond to the essential questions that emerged during the protests: That’s why the government is outlining four themes which are relevant for the nation and should be discussed: taxation and public expenses, organization of the state and public services, ecological transition, democracy of the citizens.

The debate will last till mid-March and a key figure aside Macron will be Francois Baroin, chairman of the Assembly of French Mayors (AMF), who in an additional appeal  called on the French mayors to show responsibility, advising them to  facilitate the citizens’ debate. He signed this appeal together with the representatives from the French regions and départements. The nation- wide debate has in the last weeks gathered steam and also the Church in France has begun to engage in the debate in different dioceses.

Something extraordinary happened however when Italian Interior Minister Matteo Salvini (January 6th 2019) voiced his support for the Yellow Vests, stating that he “fully supports the French who in a clear and respectful way tell their president that he is not thinking about the interest of the people.” He was echoed a day later by Italy’s Deputy Prime Minister Luigi di Maio who applauded the Yellow Vest movement praising their “interest in direct democracy,” which provoked a “diplomatic crisis” between France and Italy.

What prompts the Interior Minister and the Italian Deputy Prime Minister of a neighboring European country to interfere in such a way into France’s internal affairs? It’s worthwhile to look a bit more closely at one of the chief ideologues who behind the scenes are actively organizing a European populist movement. One such ideologue is Stephen Bannon, who after having served as ideologue for the Trump campaign, became Trump's special advisor to the White House (fired in August 2017). Since then he has become active behind the scenes in Europe especially since summer 2018. His efforts are to influence and build up populist movements all over Europe (in Italy, UK, Belgium, France, Germany) and his aim is to influence the upcoming European Parliament elections in May 2019.

On January 13th, an article was published in the Sunday edition of the German Daily FAZ by special correspondent Matthias Rüb, who singled out the role of Stephen Bannon as key ideologue for many populist movements in Europe. A key center for the populists (according to Rüb and also to an article which was published 23.01.19 in the swiss NZZ) is the former Benedictine Abbey in Trisulti (near Rome), which in 2018 was going into the hands of a new tenant, the “Dignitatis Humanae Institute” Foundation. Having been founded in 2008 in Rome, the Foundation’s main program is the “Defense of the Judeo- Christian Fundament of western civilization by recognizing man as being in the image of God.”.

Founder and chairman of the foundation is 43 year old British citizen Benjamin Harnwell, a former Tory and European parliament deputy who transformed from a left liberal to a Eurosceptic. According to the article, in 2008 Harnwell went to Rome to become an active networker of the “Dignitatis Humanae Foundation.” Among the honorary members are people such as the US Cardinal Raymond Leo Burke (known for his vicious attacks against Pope Francis) and Stephen Bannon (!).

Harnwell met the latter for the first time in 2014 in New York. According to Matthias Rüb, Harnwell invited Steven Bannon to participate at a conference in June 2014 (via Skype) where Bannon spoke at the time about three existing existential dangers for the identity of the Occident: “militant secularism” which wants to exclude faith from the sphere of politics; “militant jihadism” which with help of terrorist violence and Muslim refugees threatens the continent and the US and “wild capitalism” which “steals everybody’s human values.”

Bannon has repeatedly spoken about the “Revolt of the right” which he identifies as a “global revolt.” After having been fired as special advisor to the White House, Bannon, according to the article, turned his “attention to Europe”. Together with the right-wing Belgian lawyer former parliamentary deputy Mishael Modrikamen, Bannon at the end of May 2018 founded “The Movement”. This think tank has the aim of encouraging the birth of right-wing nationalist and “sovereigntist parties” in all EU countries and movements, Rüb stated.

Bannon wants to chair seminars in the former Benedictine Abbaye Trisulti – some kind of “Academy for future generations”. The first seminars are to take place this summer in Rome. Bannon is quoted as having stated that Trisulti is one of the “Gladiator (!) schools for cultural warriors”.

The same Steve Bannon on 16th November 2018, gave a speech at Oxford University which was uploaded to YouTube. Watching Bannon speak, one sees a demagogue in action – a man whose style of speech was refined when he was director of the ultra-conservative “Breitbart News”. A man who is driven by constant rage: a narcissist and ego maniac who keeps pounding his words.

In Oxford Bannon spoke of himself as being part of a “movement” that is against the “established order.”  “Trump,” he said, “is not the cause but the result of this populist movement". He directed his main criticism against the “elites”, in particular the “Financial elite of Davos“: "The Elites in the world are the cause of the problem, not populism.” (…)  “We are a revolutionary power,” Bannon stated in Oxford, reiterating that the biggest threat is Jihadism, Iranian expansionism as well as China, and that “Trump is in a hegemonic war against China which is a ‘mercantilist totalitarian regime’ with geopolitical attitudes of Halford Mackinder and MacMahon. It’s a predatory capitalism. “.

On January 22nd German Chancellor Angela Merkel and French President Emanuel Macron, during an historic ceremony in the city of Aachen, signed the “Aachener Vertrag” (in continuation of the Elysée treaty from January 22nd 1963 between General De Gaulle and Konrad Adenauer), which calls for a much closer German- French cooperation and integration, i.e. unite their forces and enable European companies to compete on a global scale. Following their intent to adequately respond to the challenges of the 21st century, the two states intend to increase the “convergence” of their respective economies. According to the treaty, the two nations underline that a “close friendship between the two states remains an indispensable element in a sovereign and strong European Union.” In line with their commitment for a multilateral, UN based international order, the treaty calls for a “common Foreign and Security policy.”

Both sides will intensify and consolidate the defense, technological and industrial basis and cooperation between their respective defense industries (this includes joint arms exports). They also express their commitment to “establish a stronger partnership between Europe and Africa.”

In the field of culture and education, both sides will promote strategies that aim at increasing the number of pupils and students studying French or German language; they will mutually recognize school-leaving certificates and promote German-French Excellency Centers as instruments for an improved school and vocational education.

They will further promote a closer cross-border regional economic cooperation and call for the establishment of a German-French "Council of Economic Experts” as well as promote innovation and create combined financing of common research and innovation programs.