On the occasion of its 40th anniversary, the Mid- Atlantic Club (MAC) organisation invited members and guests of the MAC from the UK, US, Bonn and Berlin. Part of the ceremony was a luncheon which took place in the premises of the Deutsche Parlamentarische Gesellschaft (Berlin).

One of the characteristic features of the MAC is that, aside from official government institutions that deal with Atlantic questions, it regularly brings together -- on an informal level -- experienced strategists, former government officials and civil servants active in politics and the economy, military officials, as well as representatives from the church, media, and the cultural world. The aim is to facilitate in-depth background discussions about relevant strategic issues.

The format of such gatherings, which take place approx six times a year, is a MAC luncheon organized for MAC members as well as guests. During the luncheon an invited guest speaker makes a presentation, followed by an intensive hour-long discussion with all the participants. The focus of the debates depends on the subject chosen for the event, which may deal with military, political, economic, or ethical issues, all of them related to the future of Germany, Europe and the U.S. in a multipolar world.

At the anniversary ceremony the participants were greeted with a short address given by Dr. Friedhelm Krüger- Sprengel (Deputy Chairman of the MAC Bonn). His remarks were followed by a speech given by the chairman of the Berlin MAC Dr. K. Lamers (Member of the Deutsche Bundestag  –MdB-). Short addresses were also given by the newly appointed coordinator for German-American relations in the German Foreign Office, MdB Harald  Leibrecht, MdB Ulrich Kelber, deputy chairman of the MAC Bonn as well as Mrs. Katherine Rafaniello from the American Embassy and by Deputy Ambassador Andrew Noble from the British Embassy. The speakers expressed particular appreciation for Dr. Friedhelm Krüger-Sprengel, who was characterized as a “pioneer” and “organizer” of the MAC. Without his direct engagement, it was emphasized, “certain things would not have functioned.”

Some important landmarks in his political life shed some light on the work of the MAC. His engagement is exemplary for the commitment of many personalities who, during the post-war reconstruction period and the revolutionary period of 1989/90 (which led to German reunification and the unification of Europe), were trying to provide new impulses. By using their professional experience as diplomats, politicians, government civil servants, historians, and jurists, people like Krüger-Sprengel and others were able to orient the developments in a new direction. They provided the ideas and organized the networks in order to lay the new foundation for a transatlantic partnership and peaceful cooperation in Europe.

The history of the MAC Bonn and its partner clubs in London, New York, Washington, Brussels and Berlin is closely related to the life of Dr. Krüger-Sprengel:

In the early 1970s he was the first German Fellow at the Woodrow Wilson Center (WWC) in Washington D.C. At that time he was in close contact with the Director of the WWC, Ben Read, later president of the U.S. German Marshall Fund and Undersecretary of State, and with the chairman of the Carnegie Endowment. In the early 1970s Krüger-Sprengel was asked by Ben Read to establish a Mid-Atlantic Club in Bonn together with British and American diplomats, which –operating on a level above day-to-day politics - would gather trustworthy people for informal discussion.

As a military lawyer, lecturer and advisor at the Federal Ministry of Defence, Krüger-Sprengel after having returned from his diplomatic service in Vienna (where he participated as counsellor and member of the German delegation at the troop reduction negotiations MBFR from 1973-1977) and after consultations with the executive directors of the Deutsche Gesellschaft für Auswärtige Politik (Mr. Gebhardt von Walther) and the Deutsche Atlantische Gesellschaft (Mrs. Fischbach-Wilke), laid the foundations for the establishment of the MAC Bonn. He worked for several years as chairman of the arms control department in the planning staff of the German Ministry of Defence, as well as Ministerial Counsellor in other departments, and was Consultant to the Minister of  Arms Control and Defence of the GDR, Rainer Eppelmann, from March to May1990.

Besides his work as President of the International Society for Military Law and the Law of War in Brussels, his activity as author of essays on International Law, legal and military political issues, and his service as legal consultant of the Fraunhofer Institute ICT, Krüger- Sprengel was the founding secretary of the MAC (1977) and since then he has been working as Executive Vice Chairman of the Mid-Atlantic Club Bonn e.V. Since 2003 the MAC Bonn has been under the chairmanship of former government speaker and State Secretary under Chancellor Helmut Kohl, Friedhelm Ost. Krüger-Sprengel was also promoter of the Mid- Atlantic Clubs in Brussels (1994), co-founder of the Club in Berlin (1996) and of the Association of Mid Atlantic Clubs in London 1996, which he is associated with as Vice President up to this day. 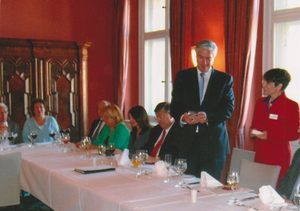 During the recent Berlin luncheon, the speakers addressed the current challenges which the transatlantic alliance is facing:

Global financial crisis, the question concerning the future of Europe and the Euro, a new strategy for NATO as well as new security challenges including terrorism, nuclear weapons proliferation and cyber war.

During the luncheon discussion period in Berlin, which was moderated by Dr Martina Timmermann (Secretary of the Bonn-MAC), it became evident that there is a need for new concepts, new network building, and a much closer coordination between the MACs in the U.S. and Europe.

With it goes the need for a much stronger integration of the younger generation in the transatlantic dialogue. During the debate some of the participants pointed to the global geopolitical change, which is linked to the new role played in world politics by countries such as China, India, Brazil, and Turkey. As one discussant emphasized, this implies that the relations between Europe and the U.S. are placed on a new basis, two societies where actually “significant social and societal changes are taking place.”  Another participant pointed to the growing pessimism which can be observed among many young students and which is reflected in their attitude towards Europe, the Euro and NATO.

During the farewell ceremony for ECB President Jean- Claude Trichet former Chancellor Helmut Schmidt gave a speech in which warned of a lack of orientation in respect to the Euro debate. Schmidt underlined that this had less to do with the Euro as such but rather with “disorientation” among the European political elites. Schmidt’s warnings make clear that in times of major transformation and disorientation, like the one we are facing right now, there is a need for such informal discussion, very similar to that offered by the MAC. Helmut Schmidt pointed to a “deficit”, a weakness that urgently must be solved. In times of great cultural and political change, when pressures and the complexity of problems prevent key political actors from looking beyond the confines of day-to-day politics, there is a need for people with experience in statecraft, combined with a deep sense of history, inner strength, cultural optimism, and courage to consider new ideas.

One can only hope that the exchange of ideas that have taken place as informal gatherings, as within the MAC, without too much media publicity, will also be possible in the future. Such exchange must be accompanied by a stronger integration of young and politically responsible citizens. The confidential informal discussion and exchange of ideas cannot be adequately replaced by a “Chat” in the Internet.

In the aftermath of the luncheon, the international participants at the Berlin 40th anniversary celebration were offered a special guided tour through the Bundestag and the Bundeskanzleramt, which gave insight into the functioning of the German government and the federal parliament.

[1] Elisabeth Hellenbroich is a free journalist and regular guest at the MAC Bonn.
Zurück