What will be the future of transatlantic relations?

Two weeks after the inauguration of President Donald Trump, leading experts in Europe who have been actively engaged in shaping transatlantic relations during the last decades, expressed a deep unease about some aspects of policy emerging in the newly elected US administration which have provoked a storm of protest both within the US as well as in Europe. 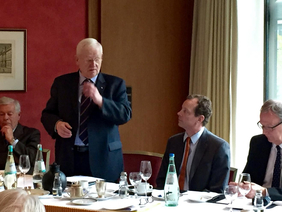 Many people within the US strategic community, as well as US observers in Europe, currently perceive Donald Trump as a highly “unpredictable”, “chaotic” and “divisive” personality: During the first days of his administration he has passed a series of decrees that turn all “certainties” that were determining the last 60 years of transatlantic relations upside down.

At the start of this year, the Bonn Mid Atlantic Club (MAC Bonn), a forum for informal and frank discussions meeting on a regular basis with leading security experts from the German, British and American strategic community, had a debate about those concerns which are on the minds of many strategic thinkers in Germany and Europe - as well on the minds of millions of European citizens.

Among the questions which were raised during the discussion were:

What will the future of transatlantic relations look like under the new American President Trump,
how will democracy proceed and what shape will future EU-US economic relations take as well as German-US relations? To what extent is the new administration a wakeup call for Europe, to stand united and express its own interests?

things are changing in a fundamental way in Washington since President Trump has taken office.

According to an American representative who spoke at a recent MAC meeting, “things are changing in a fundamental way in Washington since President Trump has taken office." The situation there is chaotic and very much in flux given that many key posts in the administration are not yet confirmed.

The recent telephone discussion which President Trump had with Chancellor Merkel was qualified as a “good discussion”. Trump's remarks about NATO as being “obsolete” made in a recent “Bild” interview  should not be understood as a statement against NATO, but they simply express Trump's critical view of some NATO members who are not paying what they are supposed to pay to NATO.

The new President will attend the G-20 summit taking place in July (7/8) in Hamburg and has in turn invited German Chancellor Merkel to visit him in Washington DC. Secretary of State Rex Tillerson is invited to attend the upcoming Munich Security Conference February 17-19 as well as the G-20 foreign ministers conference in Bonn, while Secretary of Defense Mattis will meet NATO partners in Brussels by mid-February.

The key governing concept of Trump's is expressed in his concept “America first”. Trump is reaffirming some of the “Westphalian Peace Treaty” principles which put the interests of the “nation state” at the center. “America first” and “make America great again” – if we follow the logic of Trump, America does not define itself as a “moral super power” but sees itself as a rigorous defender of “national  interests”.

if we follow the logic of Trump, America does not define itself as a “moral super power” but sees itself as a rigorous defender of “national  interests”.

The discussion at the MAC underlined the deep concerns which exist among some experienced senior politicians who have been active in shaping transatlantic relations during the past 50 years. Among them a senior German defense and security expert reminded the audience that in terms of transatlantic relations there are some “permanent” aspects which from the standpoint of the US--even if it would act alone--will remain unchanged if it wants to keep the control of the Atlantic region.

A European representative expressed major concerns about future “protectionism” that may emerge in the US, especially in US - EU relations, and the possibility of imposing punitive import taxes on European products. This aside, the potential that important trade agreements may be skipped would be detrimental to the wellbeing of the EU. At the same time, the representative expressed concern that in light of the rise of populism in Europe things may evolve in such a way that democracy itself is at stake.

The US representative made it clear that from the standpoint of the U.S. the EU is more fragile than ever. Europe would therefore be well advised to “knock at the door” of the US Administration and clearly say what it has to say. At the same time he also emphasized that in line with Trump’s “Nation State” concept there is a clear “domestic orientation”. While skipping TPP and possibly also renegotiate other such multilateral trade agreements, including TTIP, Trump and his advisors are generally more interested in “bilateral” agreements. “It’s all boiling down to the issue of sovereignty.”

The Americans who elected Trump as President, voted against free trade, migration as well as against the “ruling Washington Elite” which is perceived by many Americans as one of the sources for the deep split in American society.

“Trump’s model is to make America great again, and that went to the heart of the voters,” the American expert stated during the MAC discussion. “People voted out of concern for their place in society. They fear that the country they live in is not the country they were born in. Trump is their last chance to retain a future vision that in their perception has broken down during the last 25 years.”

At the same time, the representative from the U.S. referred to the testimony given by the new Secretary of State Rex Tillerson during the U.S. Senate confirmation hearings. Describing the new challenges for the United States--the threat of terrorism as well as foreign threats--Tillerson, during the Senate hearing, had underlined that “we are the only superpower with the means and the moral compass capable of shaping the world for good. If we do not lead, we risk plunging the world deeper into confusion and danger. But we have stumbled. In recent decades, we have cast American leadership into doubt. In some instances we have withdrawn from the world. In others we have intervened with good intentions, but did not achieve the stability and global security we thought. (…..) President-elect Trump proposed a bold new commitment to advancing American interest in our foreign policy. I hope to explain what this approach means and how I would implement it, if confirmed as Secretary of State. Americans welcome the re-dedication to American security, liberty and prosperity.”

China has been a valuable ally in curtailing certain elements of radical Islam. We should not let disagreements over other issues exclude areas for productive partnership

With respect to future US - China as well as US - Russia relations, Tillerson stated during the confirmation hearing that “China has been a valuable ally in curtailing certain elements of radical Islam. We should not let disagreements over other issues exclude areas for productive partnership,” while in respect to Russia he emphasized that “we need an open and frank dialogue with Russia in regarding its ambitions so we know how to chart our own course (…). For cooperation with Russia based on common interests such as reducing the global threat of terrorism, we ought to explore these options. Where important differences remain we should be steadfast in defending the interest of America and her allies as principles.”